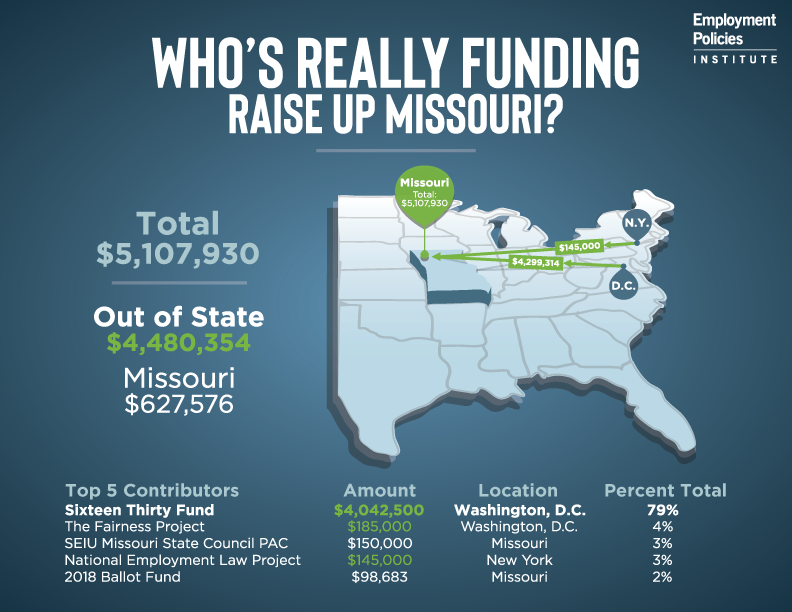 This November, Missouri voters will have the option to vote “yes” or “no” on proposition B, a ballot initiative that would increase the state’s minimum wage from $7.85 to $12.00 in 2022 (a 52 percent increase). The “local” group supporting this initiative, “Raise Up Missouri”, isn’t very local after all – 87 percent of its funding coming from dark money organizations based in New York and Washington D.C.

The east coast funding apparatus behind “Raise Up Missouri” is headlined by the D.C. based 501(c)4 organization called the Sixteen Thirty Fund. According to reports from the Missouri Ethics Commission, the Fund has given over $4 million to Raise up Missouri, including this $3 million check from August 31st.

It’s difficult to know who’s funding the Fund; donations to the Sixteen Thirty Fund are anonymous. At least some of the money comes from labor unions: An article in the Washington Free Beacon last year reported that the group has received over $860,000 from four labor unions in from 2015 to 2016, and federal filings show that this number rose to $2,235,000 in 2017. We won’t know the extent of their 2018 funding until the end of the year.

Other Key highlights include:

Proposition B is a poorly targeted policy proposal. No amount of money from out-of-state advocates can justify the economic costs Missouri will endure if it passes in November.

Companies are voluntarily raising wages without imperiling jobs in the process