House Democrats are about to vote on the “Raise the Wage Act” which would increase the federal minimum wage 107 percent to $15 an hour and eliminate the tip credit.

Some Democrats have called the increase “moderate.” However, a recent nonpartisan Congressional Budget Office report found that a $15 minimum wage could eliminate up to 3.7 million jobs. A new JCN/ScottRasmussen.com poll found that 54% of Americans do not think this trade-off is worth it.

What’s more, former top economists from the Obama and Clinton administrations previously warned how a $15 minimum wage “could harm America’s poorest workers” and that there’s no precedent for an increase this large.

A new ad, created by the Employment Policies Institute and placed in the DC edition of the Wall Street Journal, warns that there is nothing “moderate” about a $15 minimum wage and is specifically targeted toward “Blue Dog” Democrats who have expressed serious concerns about the $15 bill. 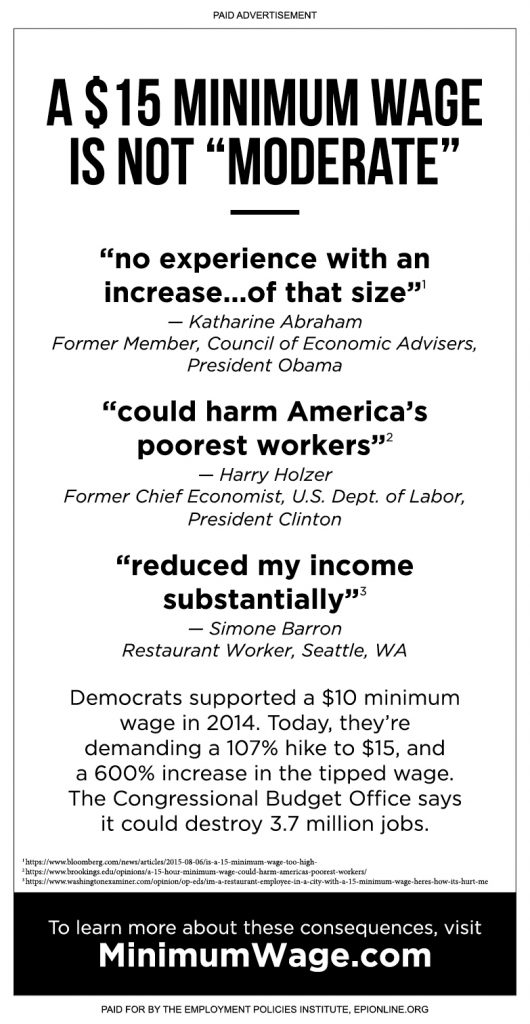 July kicks off with 22 wage hikes across the country

Sen. Sanders Learns the Hard Way About a $15 Minimum Wage