Nowhere in the history of the Fair Labor Standards Act is there any inflation-adjusted precedent for a $15 minimum wage today.

The nonpartisan Congressional Budget Office reported that this wage target would cost up to 2.7 million jobs. In a 2019 survey of labor economists, three-quarters expressed opposition to $15 per hour, and 66% stated that the federal minimum wage should be below $10 per hour.

Why? This policy that will cost millions of jobs is without any intellectual underpinning.

1. The average value of the minimum wage since its inception in 1938 is $8.07. This reached a high in 1968, likely due to the Great Inflation which began a few years earlier, but has since fluctuated around this value. Alternatively, if the federal minimum wage was simply increased based on inflation since 1938, its value today would be $4.66. 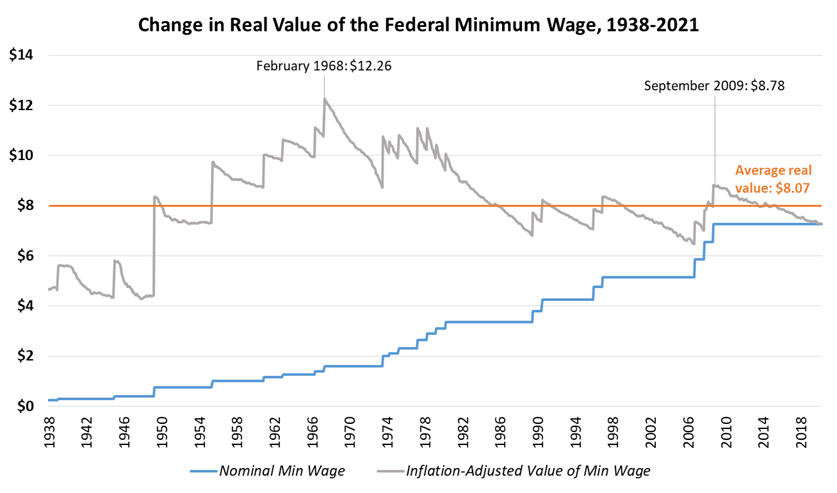 3. Raising the federal minimum wage to $15 represents a never-before-seen 107% increase. This magnitude of increase has never occurred before in the history of the Fair Labor Standards Act.

Other justifications also fall short. Sen. Elizabeth Warren (D-MA) argues that increases should be tied to productivity gains, which would set the floor at $22 and beyond. However, productivity in the food service industry, which employs the most minimum wage workers, has seen less than a 5% increase in productivity since 2009, which would only justify a $7.61 minimum wage today.

There are also regional concerns. The cost of living and relative purchasing power of the current federal minimum wage varies widely among states. To this end, enacting a binding $15 wage for all states and localities would hit many areas harder than others. In a recent analysis, Rachel Greszler from the Heritage Foundation concludes:

The Fight for $15 movement has centered on instituting a $15 minimum wage nationally with no analysis provided as justification for choosing this number. If there is no regard for the collateral damage from this 107% increase, a $20 or $25 proposal would be equally attractive to proponents. Highlighting the lack of responsible analysis normally used to set government policies, the Fight for $15’s organizing director of joked about the process of choosing a rate: “$10 was too low, $20 was too high, so we landed at $15.”