July 1st marks a scheduled raise to a $15 minimum wage for all fast food workers across New York State. Eighteen other states and localities saw minimum wage hikes yesterday too. But areas considering their own wage increases should be wary of the impact $15 can have, as demonstrated by the experiences of America’s high wage cities.

Studies show that rising minimum wages, especially as governments reach higher and higher to $15 and beyond, have serious negative employment and earnings consequences for businesses and their employees. The restaurant industry, which employs a majority of minimum wage workers, has experienced especially acute negative effects.

The case for New York State could prove to be no different. Take the example of New York City, which has implemented a phased-in minimum wage schedule starting at $11 per hour in 2016, and rising to $15 in 2018, for non-tipped employees including fast food workers. 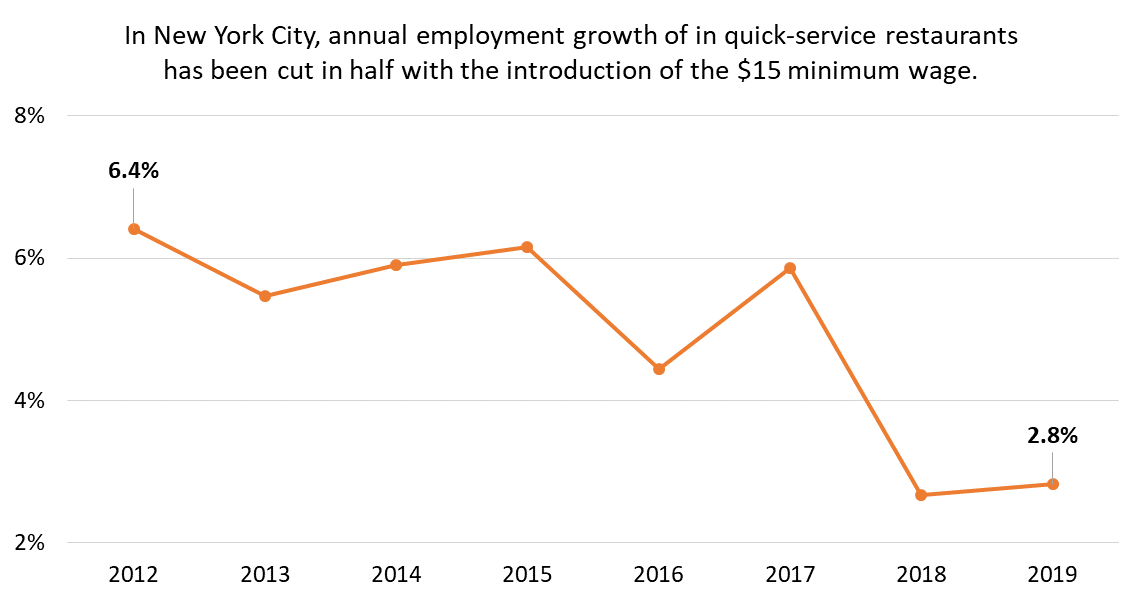 This effect is not an isolated incidence. In numerous high wage cities, restaurant employment has been adversely impacted by wages rising to $15 per hour and beyond.

In the years 2017 to 2019, prior to the effects of COVID-19, employment growth rates for the restaurant industry have dropped significantly for cities that mandate a $15 per hour (or higher) wage to be paid to restaurant employees, regardless of whether they earn tips or not.

As the state’s restaurant and fast food industry continues to recover from the long-lasting effects of the pandemic, the upward trend of minimum wages has a track record of limiting employment growth at a time when New York needs it most.

As the trend of localities and states to raise wages continues, state and local lawmakers should beware the detrimental effects, and think twice before joining the Fight for $15 bandwagon.