California dreaming continues at the expense of the state’s own employees.

As of January 1, California will be the first state to implement a $15 per hour minimum wage for most businesses (employers of 25 or fewer will reach $15 next year). The Golden State was one of the first states to embark on annual increases to reach the $15 target, and one of only seven states that have opted to eliminate the lower minimum wage for employees who earn regular tip income.

While California has been raising its wages ever higher for several years, many local areas have set their own minimum wages to surpass the state rate. As a result, 37 cities and counties have wages higher than the state rate, which will reach up to Emeryville’s $17.64 per hour this year.

Analysis of Quarterly Census of Employment and Wages data published by the Bureau of Labor Statistics shows that compared to the U.S. total, California’s local minimum wages have diminished employment opportunities in restaurants, which employ the majority of minimum wage employees.

Several of the counties containing some of the highest local minimum wage increases in California have exhibited sharply decreasing employment growth in full-service restaurants, and instead have actually turned negative – meaning these counties have actually lost jobs in the restaurant industry. While the U.S. full-service restaurant employment growth rate has slowed somewhat over the same period, it has remained positive.

The following counties account for a majority of localities that annually adjust their minimum wages according to inflation above the state mandate which is currently $14 per hour. They include some of the largest minimum wage rates in the state and the country, including Emeryville (currently $17.13), Berkeley ($16.32), and San Francisco ($16.32). 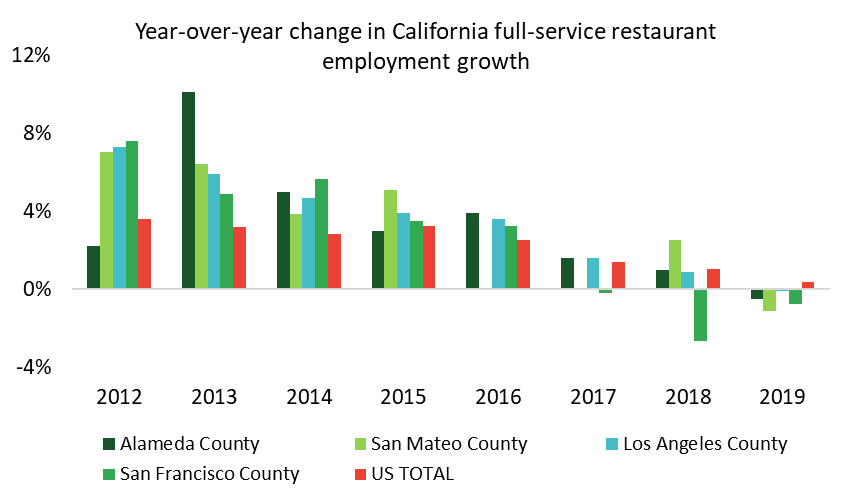 On the contrary, these California counties have experienced more severe reductions in full-service restaurant employment growth, and actually lost industry jobs amid wage hike periods prior to the pandemic. While experiencing average yearly employment growth of more than 5% in 2012-2015, each county saw restaurant job opportunities slashed with the introduction of state and local wage hikes starting in 2016:

These figures are not isolated: Since California and its cities have implemented wage hikes over the last several years, various sources have documented the negative impact on employment. A Harvard Business School study found based on historical data on San Francisco restaurants, a $1 increase in the minimum wage led to a 14% increase in the likelihood of median-rated restaurant closure. Coverage of Bay Area’s significant restaurant closures in 2016 called the phenomenon a “death march” in part because of the steep minimum wage. Restaurant owners called San Francisco’s stacked workplace mandates “death by a thousand cuts,” which included annual minimum wage increases and required employer healthcare spending, causing the city to become a “non-viable market.”

These county restaurant industries were also harder hit by the pandemic in 2020 than the U.S. baseline. While the U.S. total lost roughly 26% of jobs in full-service restaurants between 2019 and 2020, California counties and statewide rates of employment loss were even greater. San Francisco County experienced 48% loss in 2020, Alameda County had nearly 39% loss, San Mateo County had nearly 38% loss and Los Angeles County had 36% loss. California as a whole saw nearly 34% job loss in 2020.

While wage hike advocates say steep increases in minimum wages haven’t had any impacts on employment, the evidence from California shows its aggressive minimum wage regime has taken a toll on both employment opportunities for restaurant workers and exacerbated the job loss effects caused by the pandemic. Other states and localities should think twice before exporting California’s bad experiment.

Previewing the Minimum Wage Landscape for 2022