A recent New York Times article about New York City’s minimum wage positioned the Empire State as a former leader in minimum wage hikes for the rest of the country. Now, some state lawmakers are joining the rallying cry that the state has fallen behind, as other progressive-controlled cities and states are beginning to top the $15 per hour minimum wage threshold.

One primary argument progressive activists and lawmakers make is that record inflation should be a primary driver for new wage hikes, and New York should act accordingly. One bill potentially up for consideration this legislative session would raise the minimum wage as high as $21.25 per hour in New York City and $20 per hour in the rest of the state by 2026, and index future wage hikes according to inflation.

If this seems too good to be true, that’s because it is.

Looking at inflation in New York City over the last few decades shows that minimum wage mandates have vastly outpaced inflation, and Ramos’ proposed raise would be an economically unprecedented spike.

Data for the CPI for the New York City-Newark-Jersey City metropolitan statistical area indicates that over the last two decades, inflation grew by roughly 55 percent. But minimum wage mandates in the same time frame more than doubled this growth rate – spiking 115 percent. 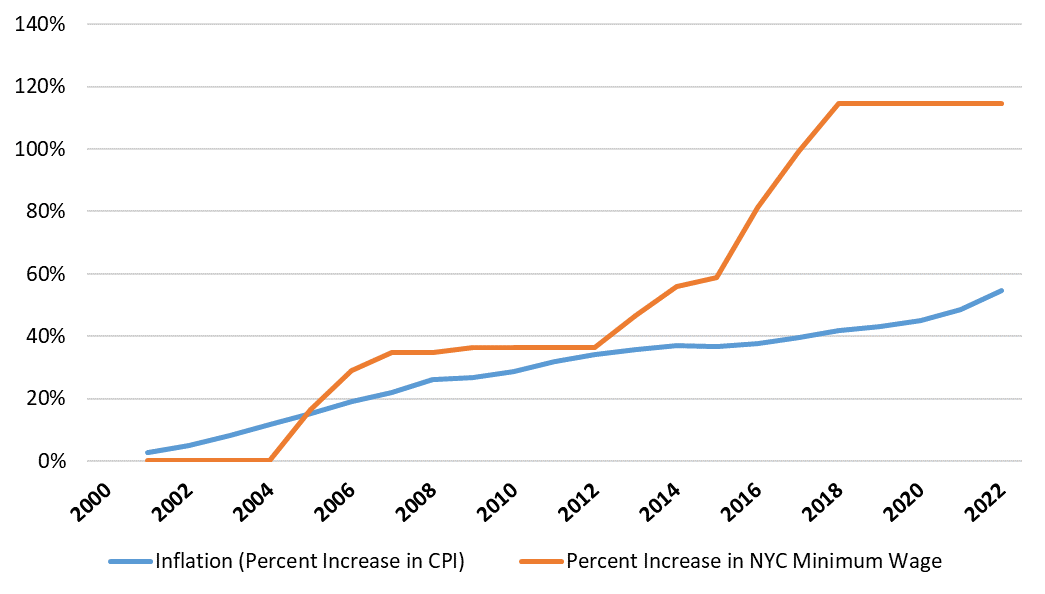 Source: Bureau of Labor Statistics and the New York Department of Labor.

In fact, if New York City’s minimum wage laws tracked inflation since 2000, the rate would be roughly $8.83 per hour.

Yet union activists pushing the so-called Fight for $15 drove minimum wage mandates nearly double that amount, and are pushing to raise them even higher once again.

There are serious consequences for these pie-in-the-sky mandates, and they primarily fall on workers themselves. These consequences are acutely felt in the state’s restaurant industry, which characteristically employs a majority of minimum wage-earners.

Over a series of minimum wage hikes to reach New York City’s current $15 per hour mandate, the city’s restaurant industry experienced declining employment growth, and even lost 3% of full-service restaurant employment from 2017 to 2019.

Recent data shows the $15 wage mandate is restricting the Big Apple’s economic recovery from pandemic struggles, and a recent state comptroller report indicates the jobless rate of 16-24 year olds in New York City is more than double the national average – and nearly a quarter of men in this age group looking for jobs cannot find one.

A Slanderous Attack on Tipped Workers

What’s on the Docket for Minimum Wages in 2023?