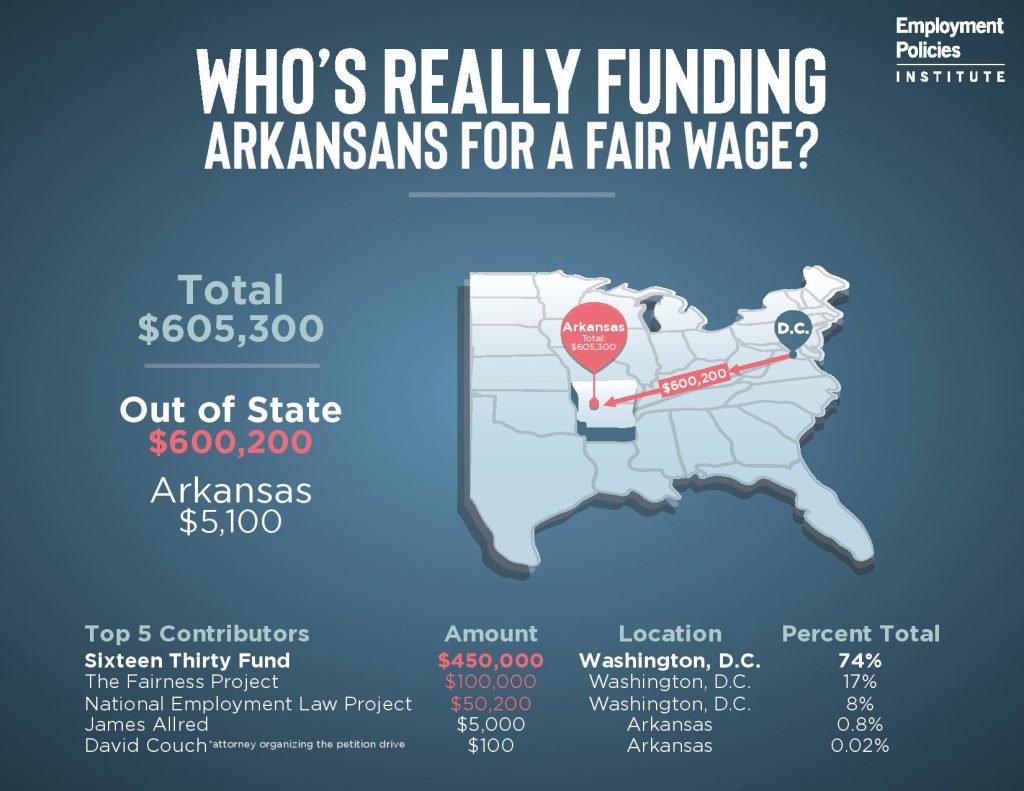 Come November, Arkansas will vote on Issue 5, a ballot initiative supported by “Arkansans for a Fair Wage”, which would hike the statewide minimum wage from $8.50 to $11.00 (a nearly 30 percent increase) by 2021.

Behind the push for a government mandated minimum wage increase in The Natural State is a group with a natural sounding name, “Arkansans for a Fair Wage.” What is unnatural, is that 99 percent of their contributions come from out-of-state.

Furthermore, that 99 percent comes from D.C. based organizations, according to reports from the Arkansas Ethics Commission.

The Arkansas Secretary of State’s website requires committees to report contributions of $50 or more. “Arkansans for a Fair Wage” reported only five such donors, and only two were from Arkansas. One of the two donors living in Arkansas just so happens to be the attorney organizing the petition drive. This information pokes holes in the implicit assumption that the people of Arkansas are for minimum wage hikes.

The D.C. based Sixteen Thirty Fund gave $450,000 to “Arkansans for a Fair Wage”, by far the group’s largest contributor (almost 75 percent of their total funding). The deep-pocketed Sixteen Thirty Fund has also contributed over $4 million to another “local” organization called Raise Up Missouri – which begs the question, where is all their money coming from?

The Sixteen Thirty Fund is not required to disclose their donors. Unions, on the other hand, are required by federal law to publicly disclose how they spend their members’ money. According to public documents, unions gave the Sixteen Thirty Fund over $2.2 million in 2017. We will not know how much the Fund received from unions in 2018 until the end of the year, and after the vote on Issue 5.

Voters should be skeptical of groups who claim to speak for local residents, when their funding suggests otherwise.

Companies are voluntarily raising wages without imperiling jobs in the process